Cedar Lane is proud of its more than 50-year heritage of outstanding music ministry. We view music as a vital component of worship, congregational life, and of reaching beyond our walls to build community. We endeavour to involve as many interested volunteers as are willing and able to participate. With so many opportunities, we hope that we have a place for your talents and those of your family (and friends, too!)

Concerts at Cedar Lane (September - May)

Concerts at Cedar Lane began offering its series of free concerts to the public in the fall of 2009, with the intention to highlight the diverse artists around the metropolitan DC area. Our artists perform for nominal fees because they truly enjoy our venue and the support of our devoted audiences. We do rely upon the goodwill donations of our listeners to support these artists.

The artists span a broad musical palette and examples include the solo guitar of Charles Mokotoff, Amadou Kouyate with his kora, Ron Warren with his Native American flute, steel pan artist Victor Provost, the Heritage Signature Chorale, and US Army Men's Chorus. We have featured Frank Solivan and the Dirty Kitchen Bluegrass Band before they earned Grammy nominations, and the Bumper Jacksons before they became touring artists. Jazz masters Chris Vidala, Kenny Rittenhouse, and Steve Jones all appeared with fantastic sidemen and Christiana Drapkin had the audience in her hand as she sang tunes from the American Song book.

Our January benefit concerts have become the soul of our series. Each year our Music and Social Justice Ministry Teams have performed a concert to generate need funds for local non-profits that are exceeding their limits in serving the community. We are proud to have raised over $50,000 to support the work of A Wider Circle, Rebuilding Together Montgomery County, Interfaith Works, Beacon House, Casa de Maryland, Shepherd's Table, and Congregation Action Network. 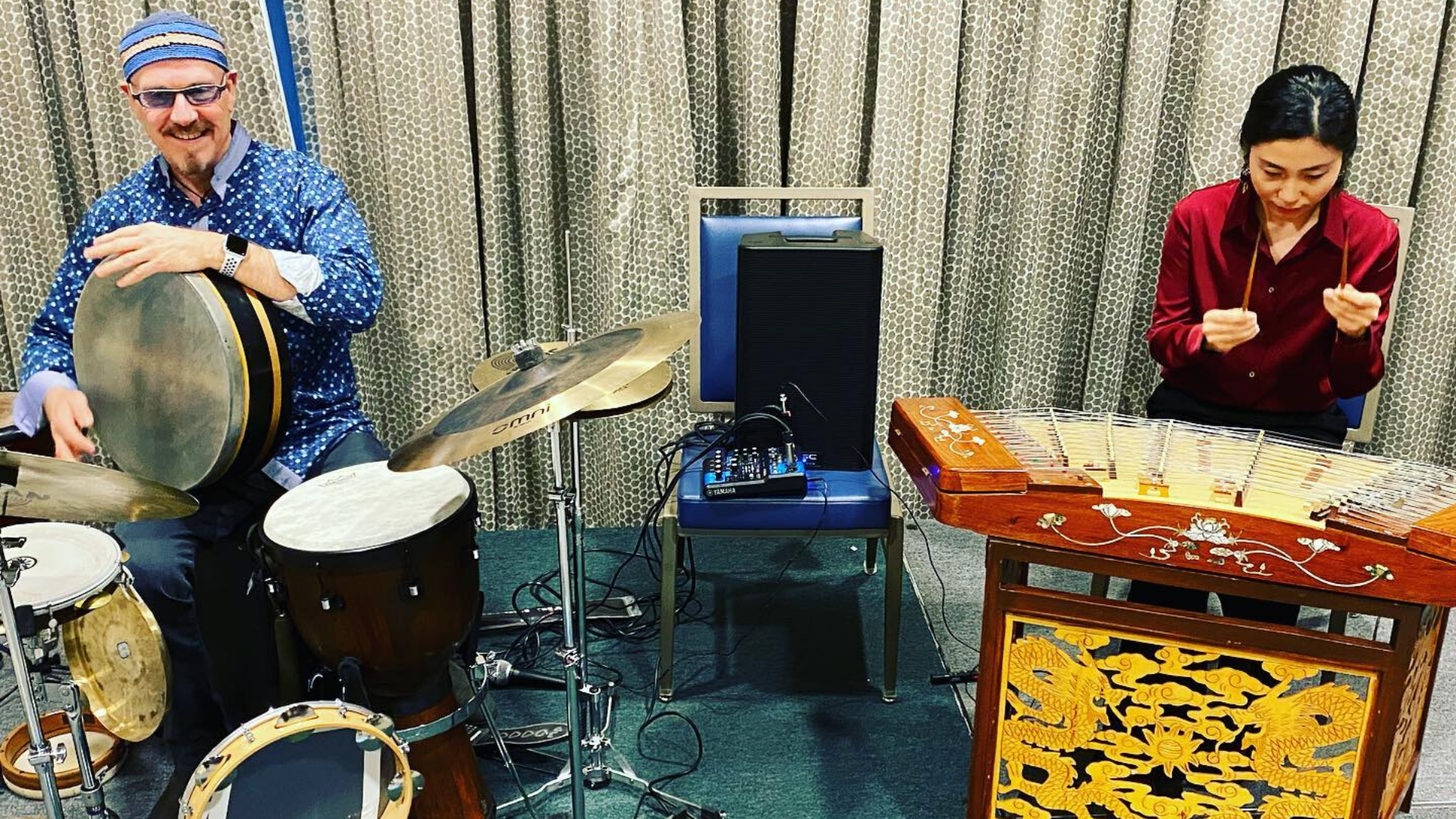 Because you have been such dedicated patrons of the concert series we had to take a serious look at Sunday's concert by Dong Xi.

Given the ever widening reports of the Coronavirus and viewing enough internet reports of the cancellations of other concerts, we felt it was only prudent to postpone the appearance of Percussionist Tom Teasley and Chinese dulcimer artists, Chao Tian.

We care for you and would not want to intentionally put you in harm's way in what could be a large gathering of people. On the other hand, if we went forward with the concert and attendance was sparse, that would be disappointing for the artists.

Fortunately both Tom and Chao have agreed to postpone and we will look for a future date as soon as it is feasible to do so.

Thank you for your understanding.

Cedar Lane provides a place for people of all ages to sing!  For our youngest members, we have our Children's Choir, directed by Cedar Lane member Jenny Crane, which introduces children Pre-K through 4th Grade to learning about our faith through song.  Our Youth Choir is directed by Dr. Henry Sgrecci and provides a continuing choral experience for our older singers, 5th Grade and above.  Our Adult Choir includes 45 or so members, and gives a powerful voice to today's social justice issues and performs during most Sunday morning worship services.  See the bottom of the page for more info about these choirs.

In 1974 the Cedar Lane Women’s Alliance purchased a two octave set of Schulmerich Handbells as a memorial. Over the years more bells were added, culminating with expansion to a complete five-octave unit and three octaves of hand chimes in 2011.  Our Handbell Choirs are divided into two groups - Canto and Out Bells.  Canto is is for teens and adults who are prepared to take on challenging music, while our Out Bells handbell group is for new or less experience ringers.  See below for more info!

Guest Musicians are a welcome presence at Cedar Lane. In worship services and special concerts our singers, guitarists, song writers, pianists and percussionists add depth, variety and extraordinary quality to our music ministry. In fact it was these volunteers who presented our 2016 Concert to End Gun Violence as part of a National Day of Remembrance.

In March of 1985, a contract was signed with Cannarsa Organs for the construction of a 51-rank, four-manual pipe organ, at that time the largest instrument in Montgomery County. The installation was completed in the fall of 1987, and was celebrated by a year-long festival which included special services and an organ recital series.

In December 2000, an overwhelmingly successful campaign was launched to fund an extensive renovation of the organ. Improvements included refurbishment of the console and a complete update of the keying system which provided for an expanded stop list and MIDI capability, as well as the addition of a number of new digital voices from the Walker Technical Company. More digital voices were added in 2007. The resulting instrument is one of the finest in the Washington, DC area, and will celebrate its 30th anniversary in October 2017.

Concerts at Cedar Lane began offering its series of free concerts to the public in the fall of 2009, with the intention to highlight the diverse artists around the metropolitan DC area. Our artists perform for nominal fees because they truly enjoy our venue and the support of our devoted audiences. We do rely upon the goodwill donations of our listeners to support these artists.  Click the event links below to view our upcoming concert info!

The Cedar Lane Adult Choir is our 45-voice adult ensemble and it gives a powerful voice to today’s issues of social justice. Many come to the Choir with a history of having sung in high school and college and seek to rekindle their skills and the great sense of common purpose shared among our singers. Others have not sung much with a large group but are inspired to try. The Choir is not auditioned. As we like to say: “If you can carry a tune, walk up the stairs to the Choir Loft, smile, and work collaboratively, we have a place for you in the Cedar Lane Choir!”

The Youth Choir is a continuing choral experience for our older singers who aspire to sing challenging music in three and four-part harmony. Directed by Dr. Sgrecci, this ensemble, for 5th graders and up, sings during “Time for All Ages” services on the third Sunday of the month as well as special occasions. Youth Choir members enjoy singing with each other and present a mixed repertoire that includes songs that they’ve learned in their school choirs, current popular songs, and songs that they find particularly meaningful.

Cedar Lane Children’s Choir introduces our children to singing their faith. Directed by Cedar Lane member Jenny Crane, this ensemble includes children from Pre-K through 4th grade. Children’s Choir will sing for “Time for All Ages” services on the third Sunday of the month as well as special celebrations and select Chapel services. The repertoire will reflect themes of the children’s RE classes and principles of UU faith. Over the course of the year the children will learn to use their singing voices, match pitches and sing in rhythm, sing by rote and read music.

Out Bells is our three octave preparatory bell choir for new or less experienced ringers. Open to 5th graders through adults, this bell choir helps ringers build basic ringing skills while learning to work as a musical team. Out Bell rehearsals are relaxed and fun.

Canto is our five-octave ensemble with most of the members having learned to ring as members of Cedar Lane. We are very proud of our these ringers, a mixture of teens and adults, who prepare challenging music that features a variety of unique sounds performed with great precision. Canto rings in worship services several times a year and has performed community concerts at King Farm Ingleside, the NIH Children’s Inn, and Asbury Methodist Village.

All are welcome to join our Summer Choir in July and August each year! No strings attached; no long term commitments. Just show up at the front of the Sanctuary at 9 am on Sundays, pick up the music of the morning and rehearse until it’s time for the service. It’s a great time to flex those vocal chords and experience worship through song. Join us!

From Memorial Day weekend through Labor Day weekend, join us every Sunday for 11 am YouTube Livestream.

Join Us For Worship

Welcome to Cedar Lane, a liberal religious community that has been an important part of Montgomery County since 1951.

Together, we create a force more powerful than any one individual or belief system. As Unitarian Universalists, we do not have to check our personal background and beliefs at the door: we join together on a journey that honors everywhere we’ve been before.

In being together we are able to love and support one another within the Cedar Lane community, and are therefore better able to support the local community and beyond with our social justice efforts to build a more just world.

Get to Know Us

Get a feel for who we are and what we're like by checking out our publications and photo galleries.